The Fierce Urgency of the Social Security 2100 Bill

On December 7, 2021, House Ways & Means Social Security Subcommittee, chaired by John Larson (D-CT), held a hearing titled “The Fierce Urgency of Now – Social Security 2100: A Sacred Trust.” Click here to view the recordings, review the witness list, and read the testimony. The following is a synopsis of some of the more salient arguments for the bill and its importance, as ascertained by NOSSCR staff, without attribution for individual points.

The time to pass Social Security 2100: A Sacred Trust is now. Congress has not expanded the United States’ number one insurance plan since the days of President Nixon about 50 years ago. More than 140 organizations support the bill, and polling data clearly demonstrates that the public strongly supports Social Security despite it being the ‘third rail’ of politics.  The data is clear: despite Congress’s reluctance to act, the public demands it. 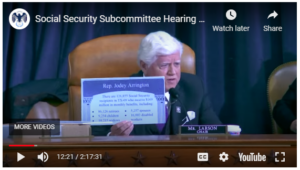 As with many cracks in our society, the pandemic has underscored the need for action on behalf of the nation’s disability and retirement benefits. Social Security benefits have historically been one of the great economic equalizers in our country; for this to continue as costs rise, the time to act is now.

Seniors of color are especially likely to be in or near poverty, and racial disparities in earnings carry over into Social Security benefits. People of color are also more likely to hold jobs with risks of injury, leading them to claim retirement benefits sooner and accept even lower monthly payments. These jobs, among other disadvantages, have led to shorter life spans among people of color during the pandemic, which lies in sharp contrast to the fact that some lawmakers believe we should raise the retirement age. Further, people who struggle with income security are less likely to have pensions or other sources of income in retirement to supplement their earned government benefits.

Women too are especially impacted by Social Security’s changes, or lack thereof, since their benefits are generally lower than men’s. Expanding Social Security would help older women meet their needs, especially as they are likely to outlive their male counterparts.

The 2100 Act updates some key elements of our current Social Security disability benefits system to reduce inequality and poverty in meaningful ways. Eliminating the five-month waiting period for disability benefits, as Congress recently did with ALS, would further assist those who cannot wait any longer for the income. Eliminating the loss of all disability benefits with a set amount of earned income, called substantial gainful activity, helps those trying to work again without harshly penalizing their efforts or causing them to lose their essential government medical benefits. Eliminating the Windfall Elimination Provision will stop penalizing those who receive pension payments in addition to their Social Security benefits – the combined total is far from a ‘windfall.’

Some detractors of the bill believe while reform is needed, the bill’s benefit increases are too costly, the bill doesn’t achieve long-term solvency, and that the language of crisis is overstated. The average income of retirees has increased faster than the average income of people younger than retirement age. (It’s important to note that an average can obfuscate a wealth gap by presenting a number in the middle.) Other ideas for reform include legislation that focuses on lower-income households and reducing dependence on the government.

Proponents and detractors of the bill seem to disagree on whether retirees are generally doing well under the system as it stands. Expanding the role of the government in reducing poverty is also a key source of contention, including the tab it leaves for future generations to pay.

During this hearing, it’s evident that those in favor of the bill believe it is incumbent upon us not to kick the can down the road. People are suffering. These benefits are earned and paid into by our citizens; they are not entitlements. This month, five million people are getting a check that falls below the poverty line with our country’s wealth disparity growing every day. They deserve better next month and every month thereafter. The time to act is now.