What Does Black History Month Have To Do With Full Retirement Age? 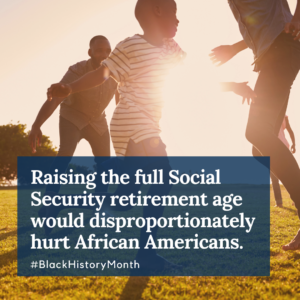 As February is Black History Month, we’re taking some time to reflect on the black community’s unique intersections with Social Security and how history can inform future equity. One clear and simple truth that arises upon reflection is that raising the full Social Security retirement age would disproportionately hurt people of color and erase the equality the programs have historically promoted.

Before her appointment as Acting Commissioner of Social Security, Dr. Kilolo Kijakazi was a fellow at the Urban Institute whose research included the role of Social Security in the economic security of African American workers. Most African American workers were initially excluded from Social Security benefits, but through policy changes over time, it has become a tool that reduces economic disparities between black and white families. Still, people of color face structural racism in America’s labor market, which inevitably leads to different decisions in retirement plans and savings. There are higher rates of unemployment or underemployment, lower wages paid for the same level of experience in jobs, and a higher frequency of employers who don’t offer retirement and other benefits.

Given this economic inequality, Dr, Kijakazi’s research analyzes proposals for improving Social Security’s solvency with the lens of potential disparate racial impact. One of the more caustic proposals was to increase to the full retirement age (FRA) from 67 to 69:

This proposed change is projected to reduce Social Security benefits in 2065 for both African American and white beneficiaries by about 6 percent if they retire at the proposed FRA. This change is premised on longer life expectancy, but African American workers have shorter life expectancy than white workers on average. Moreover, African American workers face greater health challenges and may be unable to remain in the labor force until the FRA. Currently, if a worker retires early (age 62 according to the FRA), his or her benefit is permanently reduced to compensate for each additional month benefits are received before age 67. If the FRA were increased to 69, those retiring at 62 would have their full benefits reduced by about 40 percent. Nearly half of retirement beneficiaries claim benefits at age 62. The federal poverty level for African American seniors is projected to increase by 1 percent under this proposal.

We cannot go backward in the progress Social Security has made in providing increased economic security for African Americans. Further, the COVID-19 pandemic has exacerbated the life expectancy differences between white people and people of color. According to the Centers for Disease Control and Prevention (CDC), while life expectancy declined by one and a half years overall, the disparity “between the non-Hispanic white and non-Hispanic black population increased from 4.1 years in 2019 to 5.8 years in 2020.” The gap had been narrowing over the three decades prior.

So, during this month and beyond, when proposals to secure Social Security’s solvency arise, make sure to analyze them through the lens of historic racial injustices and current economic disparities. Together we can find solutions that continue to bridge gaps and promote equity.