Through four Social Security commissioners over more than thirteen years, NOSSCR has worked diligently to raise the fee cap – and today we reached our goal! We are thrilled to deliver this victory to all the Social Security disability representatives who deserve it and for whom it is long overdue.

When Acting Commissioner Dr. Kilolo Kijakazi spoke to NOSSCR conference attendees during the opening session of our annual conference in Austin, she announced that, after considering information provided by NOSSCR, the fee cap will be raised to $7200 effective November 30, 2022. 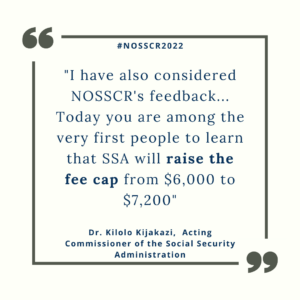 Each time the fee cap was raised (in 2002 and 2009), it took several years of determined effort on the part of NOSSCR and our members, and this time was no different. In 1990, NOSSCR was influential in getting the fee agreement included in Congress’s budget reconciliation, creating a streamlined way to seek approval of fees. To this very day, we continued our fight for an adjustment to the maximum fee by tailoring our approach to each commissioner’s priorities over time.

Our success would not be possible without the diligent consideration and approval of Acting Commissioner Kijakazi, collaborative efforts of several components of the Social Security Administration (SSA), advocacy by members of Congress, the solidarity of our allies, and of course our members who partnered in our advocacy by making calls, sharing their stories, writing letters, and signing the petition.

“With the help of our allies inside and outside the disability community and on Capitol Hill, we were able to show the Acting Commissioner that this was the time to act, and the Commissioner made this a priority by boldly taking this action,” said NOSSCR Executive Director Barbara Silverstone.

NOSSCR is anticipating that a Federal Register notice about the fee cap increase will soon be published and we will keep you informed as developments arise.